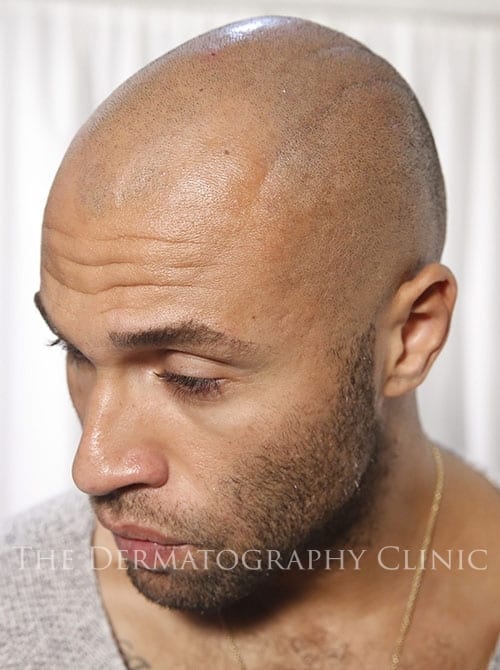 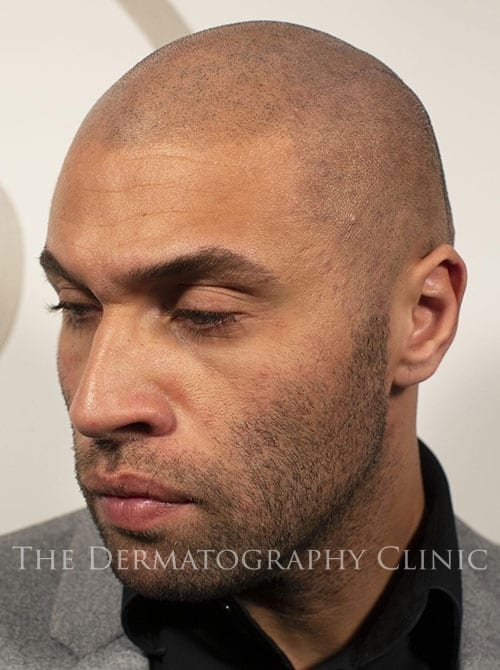 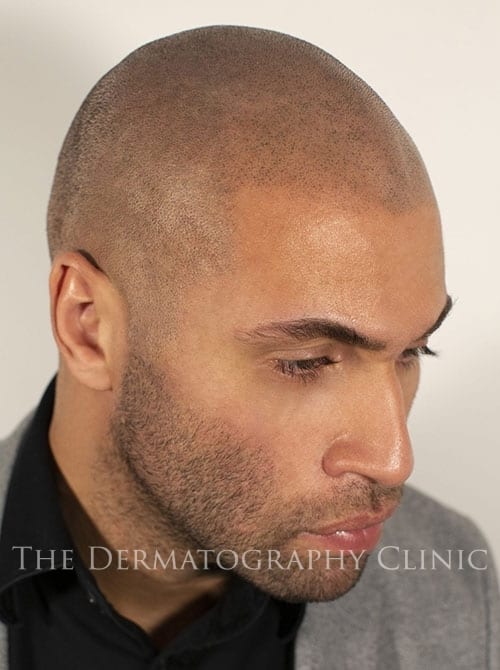 Scalp micropigmentation is a cutting-edge non surgical hair loss treatment to help you enhance your look easily and naturally – ‘the natural solution for crown balding and a receding hairline’.

Customer Before & After Images

True likeness pictures ~ A selection of Renée’s recent smp work. Click on the images to enlarge.

Hair loss can affect you both emotionally and physically.  By discovering Micropigmentation we hope that we can inspire you to have the hair you deserve.

Hair loss doesn’t only affect older men, it can affect younger men too and can even start as early as one’s teens.  Every case is different but hair loss can be particularly hard for younger men to handle and often results in making hasty decisions out of desperation.

While SMP is a fantastic solution it can be a daunting experience as it involves changing your appearance.  We provide help and support throughout the whole journey which includes adapting to the transition post treatment.

After an SMP treatment it is important to keep the rest of the hair as low as possible in order that the SMP looks realistic.  It will look darker around the edges if the natural hair is left too long.  Most people find this easy to maintain as in most cases they are already keeping their very low prior to their SMP.  It is important to understand that hair should be kept low before commiting to an SMP treatment.

Sometimes it may be difficult to adjust to a new routine.  While some men are happy to shave every day others prefer to know how many days they can maintain good results before having to shave so they can take the lowest maintenance approach.   For most people it’s between 2-4 days and this varies from person to person according to the density and thickness of one’s hair.

In Melvin’s case it took a little more time than usual to adjust after his SMP treatment.  He developed some problems after his return for his follow up a year later.  Here is his story.

It normally takes on average 3 sessions to build up enough layers to finish the treatment but in this case it took 4.  This is not unusual as Melvin had really dark and thick hair around the edges so the extra session was necessary in order for the SMP to blend with his own hair.

In order to maintain results a follow up session is usually required within 6-9 months.  Melvin came back at 12 months and in his case the sides were so dark it would take a further 4 sessions to blend with the rest of his hair again.  It is not unusual for results to fade alot after 12 months as it is a soft procedure and considering several factors including your maintenance and environment.

After the 4th session I was reluctant to add any more as I felt that anything more would become too heavy and look questionable but although I had added several layers, the hair around the edges was still much darker.  This was strange so I decided to take a step back and investigate.

Upon closer assessment I noticed it was not the lack of SMP that was causing it to look dark around the edges.  Nor was it that his hair was too dark or too dense in those areas.  I noticed that his skin was slightly darker in some areas than others but was not inflamed or red.  It was subtle but it was spreading around the back of his neck and was not the healthy skin I was used to. So rather than adding more I decided to take a different approach. 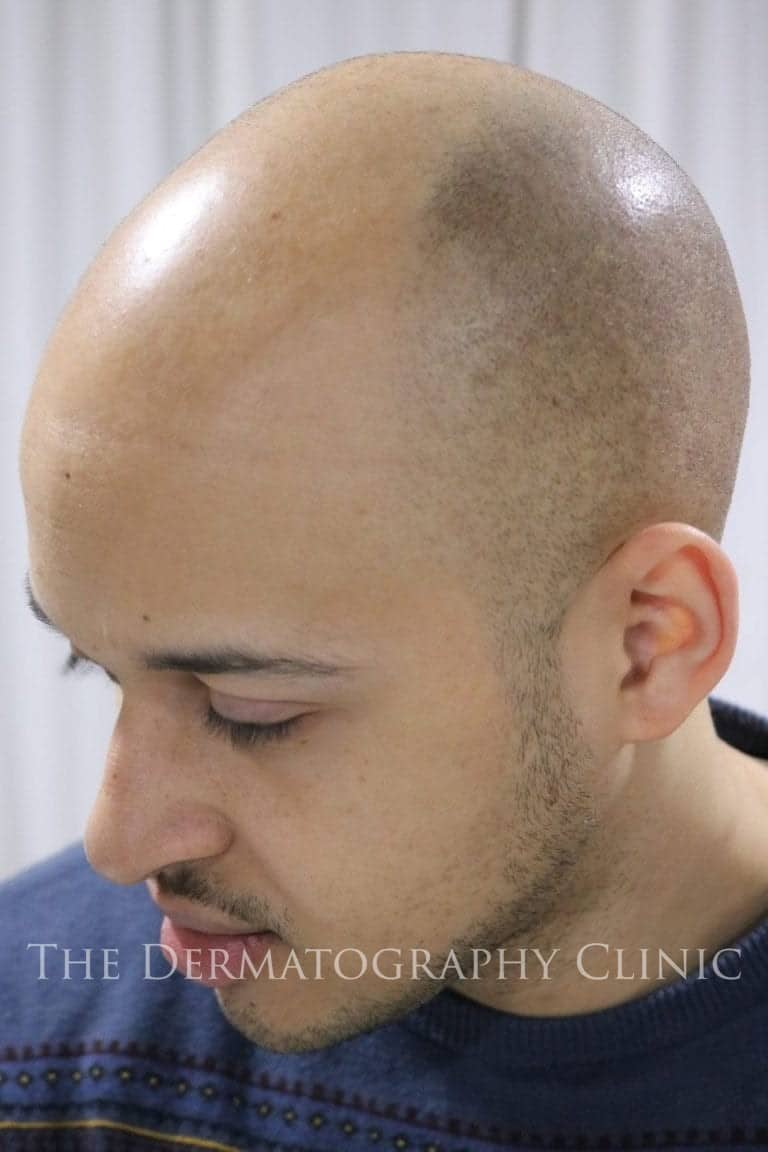 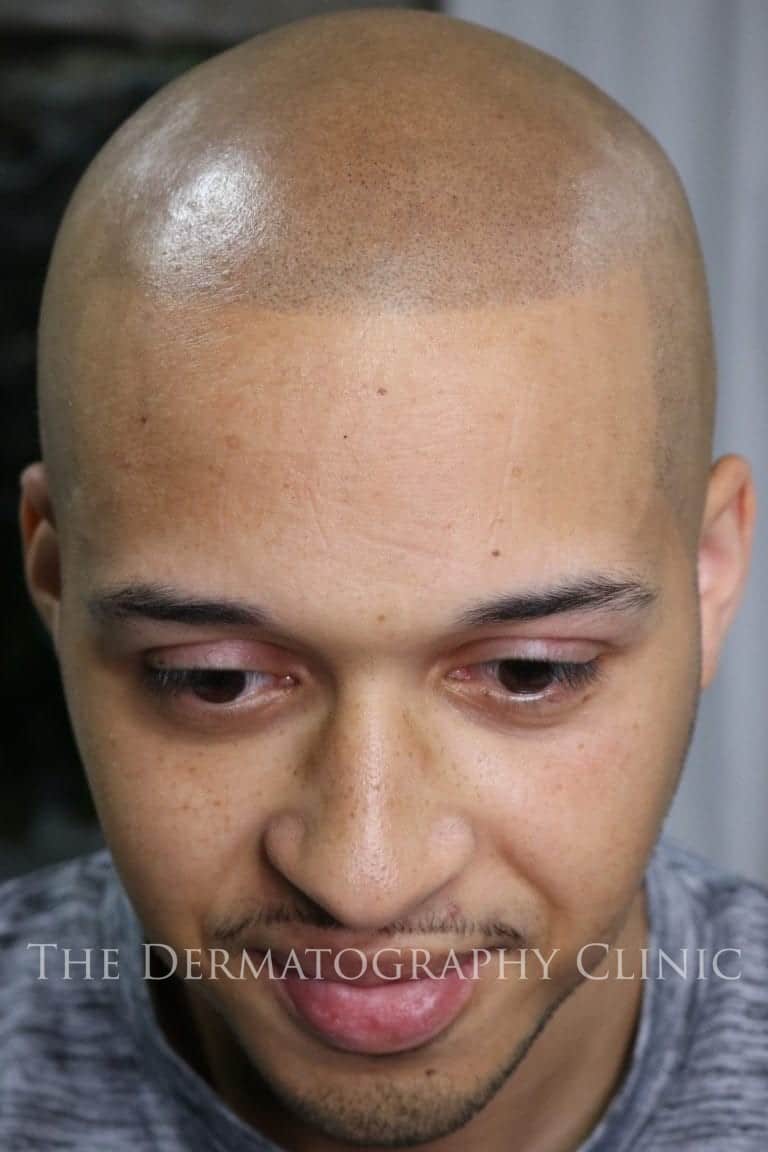 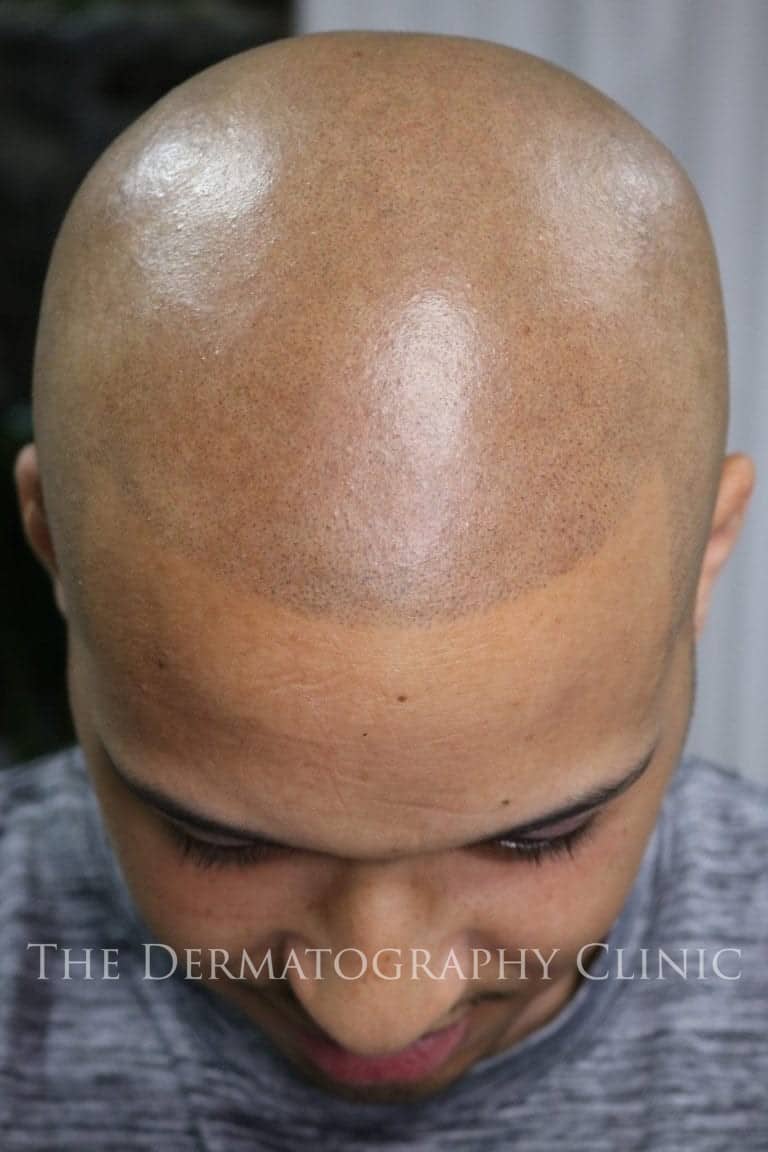 Naturally Melvin wanted me to add more SMP in order to camouflage the darker areas which would have been a quick fix, however I felt this would be wrong.  If I added more SMP and his skin later lightened again in those patchy areas, then this would result in a dark patch.  This would make the whole treatment look overdone and questionable and again not match the rest of his hair.

In the summer months sun damage can occur and it is important not to have SMP on freshly tanned skin. It is better to hold off and delay the treatment for at least 6 weeks after tanning as the skin tone can change as the tan wears off.  However in Melvin’s case because the dark skin was around the sides only and patchy, it was not sun damage as that would occur everywhere, unless of course he was wearing a hat, which he did not.

Initially I thought it may be an allergy, irritation or a skin condition so I recommended Melvin to seek medical advice from his GP and perhaps a referral to a Dermatologist before proceeding. Even if just to rule out any medical condition and to be on the safe side.  The outcome was good as there was no allergy or medical condition but neither the Dermatologist nor the GP could give Melvin any answer or solution as to why his skin was changing and the problem seemed to be getting worse.

So I continued with some further investigating of my own as I knew Melvin’s skin was healthy before so I knew that something had changed.  I asked Melvin if there was anything different he had been doing since the irritation had started and to walk me through his routine in detail step by step.  I knew that he was using a razor and had recommended a machine before but he didn’t want to use a machine and that’s ok as some men prefer a wet shave.  Melvin said he tried several types of machine, was not satisfied and prefered the results of a razor. He felt that he couldn’t find a machine that cut the hair low enough.

Melvin was using a razor for a whole year already but since I used to perform wet shaves I was particularly interested in the details.  Not all skin reacts well to a razor, especially if shaving in the wrong direction.  Melvin worked with me together with close communication and we tried a few things.

The outcome was as follows.  Melvin needed to shave every 2 days for the perfect result so what he did differently was to shave every 2 days rather than 3 as he previously did.  What we found to be the issue was that when he shaved at 2 days, it was causing irritation.  However when shaving at 3 days then there was no irritation and skin was happy but his hair was too long.

I recommended that Melvin stop using the razor and after a few weeks the patches were totally gone, the skin was healthy again and his SMP was perfectly even without the need to have any further work done.  I recommended a more professional barber level clipper which he had not tried before and he found the hair did get low enough and he was much happier with the result.

Melvin returned for his follow up session in 2019 a year later, he had a single top up session with no issues and I will see him again soon.  We have discussed transitioning to a more permanent SMP option and perhaps a slightly softer hairline.

It’s made a huge difference in my everyday life and it shows that you care as much for your clients.

As a man I was very nervous about what to expect, but you made me feel relaxed straight away, your a credit to your industry and I’d be happy to recommend you.

Absolutely fantastic treatment! Renée is not only good at her job but also a lovely human being, I had scalp micropigmentation treatment in areas where I was balding and she has helped to cover that up and make me feel more comfortable. If your thinking of taking the plunge you are in the best of hands!

Renée was very professional and understood my concerns and we discussed every stage of the procedure.

I can’t express how much Renée has helped my confidence. I suffered with alopecia for 5 years without hope of having any hair or treatment to resemble hair. Having gone to Renée and having micropigmentation done was the best thing I’ve done for the alopecia. She’s the best at what she does!

Thank you Renée for doing a great job. It doesn’t look false at all. I feel more confident than I did before

Lovely person. Excellent result and now I have hair. Thank you so much can’t wait to come back and get more hair soon.

Her eye for detail is second to none. She treated me like a royal guests. Excellent service. Cannot wait to come back.

Login to The Dermatography Clinic
Reset Password
Enter the username or e-mail you used in your profile. A password reset link will be sent to you by email.
error: Content is protected !!
We use cookies to ensure that we give you the best experience on our website. If you continue to use this site we will assume that you are happy with it.AcceptPrivacy Policy