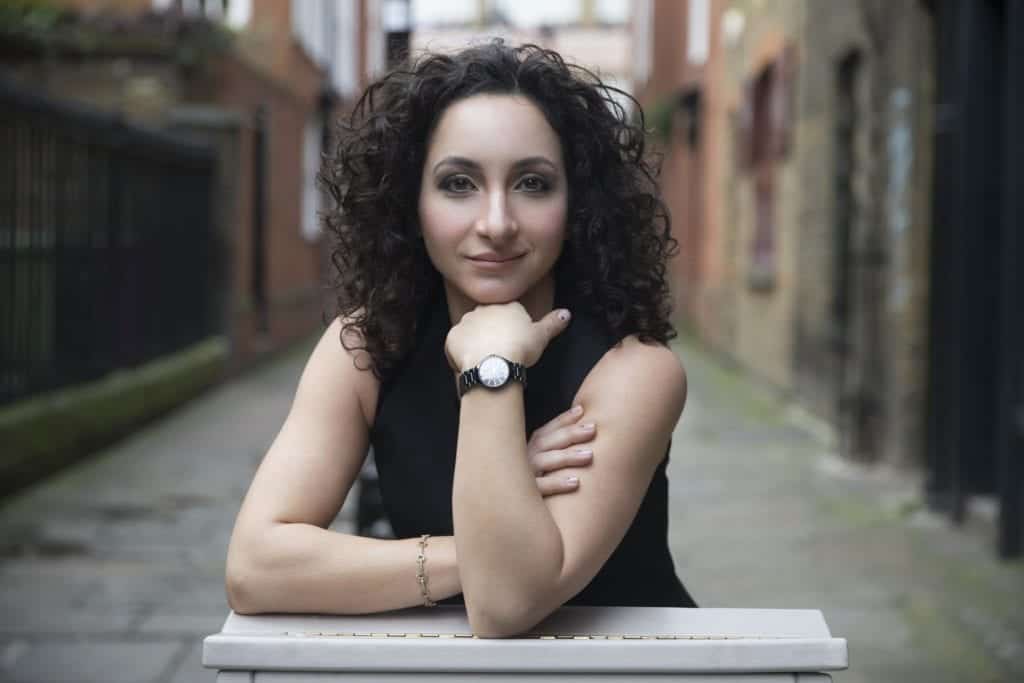 We all have a story. Places we’ve visited, people we’ve met, our successes, failures, and the things we’ve been through along the way.

Every story is fascinating to me, but sometimes the journey of someone in particular just stands out and really needs to be told. This is why I’m writing now to tell the story of Stavroulla Cleovoulou, known to her friends as Renée. Inspirational and heartbreaking in equal measure, this is one you want to read.

In 1962, there was a little barbershop in Puma Court, just off the main high street in the East London borough of Spitalfields. The barbershop was called Kleo’s and its proprietor was Renée’s father Kyriacos Cleovoulou. The shop was popular and always busy. The shop next door was called Nicolerenee, opened in 1998, owned by Kyriacos and managed by Renée and her mum, was equally popular and made bespoke wedding dresses for brides across London.

While co-managing the business, Renée was studying Art and Fashion Design at Saint Martins while balancing the demands of being a single mum at just 19 years old. Despite these challenges, business was booming, and Renée, originally from North London, loved living and working in the heart of Spitalfields.

Events took a sad turn however in 2004 when Renée’s father Kyriacos passed away.

The family were told he would make it, so it was quite unexpected when he died. Kyriacos left the property to Renée, but there was no business without him. Renée didn’t cut hair, so it was like a little shrine for a while. Renée lived upstairs above the shop and couldn’t deal with seeing her fathers shop everyday without him in it, so she rented it out to the first person who showed any interest, a Korean hairdresser who worked locally.

Renée continued running Nicolerenee next door. As the demand for her dresses grew, Renée joined the workshop in the basement of her bridal shop with the basement of the barber shop, and used the new space downstairs as a fabric cutting room to keep up with demand. 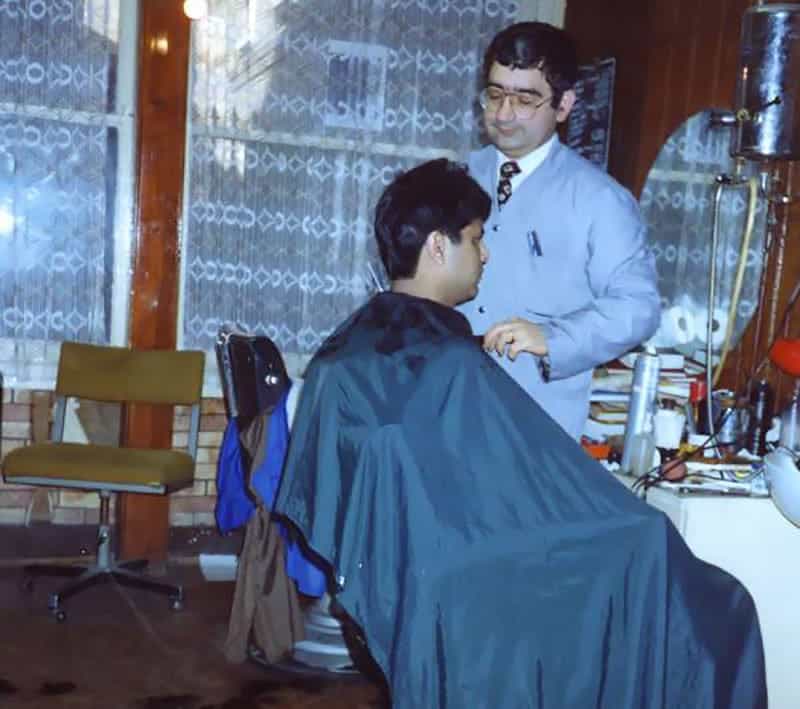 Renée’s father at work. This was Kleo’s barbershop in the early 90’s

In 2006, Renée got her eyeliner tattooed by permanent makeup veteran Andrew Stassi. This was a revelation for Renée, and fascinated by the world of permanent cosmetics, had her eyeliner done again in 2008 and within 3 months, Renée was fully trained and offering permanent makeup. The cutting room downstairs gave way to create space for a treatment room underneath the hairdressing salon upstairs, and Renée was in business!

The world of permanent makeup was very different back then. Not many technicians were operating in London, and those who were took a very ‘Harley Street’ corporate approach. As an artist this didn’t really suit Renée. She saw an opportunity to do things differently, by offering a more relaxed vibe and friendly service. She didn’t want to refer to permanent makeup as a ‘procedure’, and instead focused on the customer experience. Renée wanted her clients to feel comfortable and at ease when they came to see her, and with many of her clients crossing over from her wedding dress business, she felt she had an opportunity to serve a different kind of customer in a different way.

Renée’s gamble paid off. Her clients trusted her completely, having already put their faith in Renée when buying the most important dress of their lives, and the business blossomed into one of London’s most successful permanent cosmetics studios. 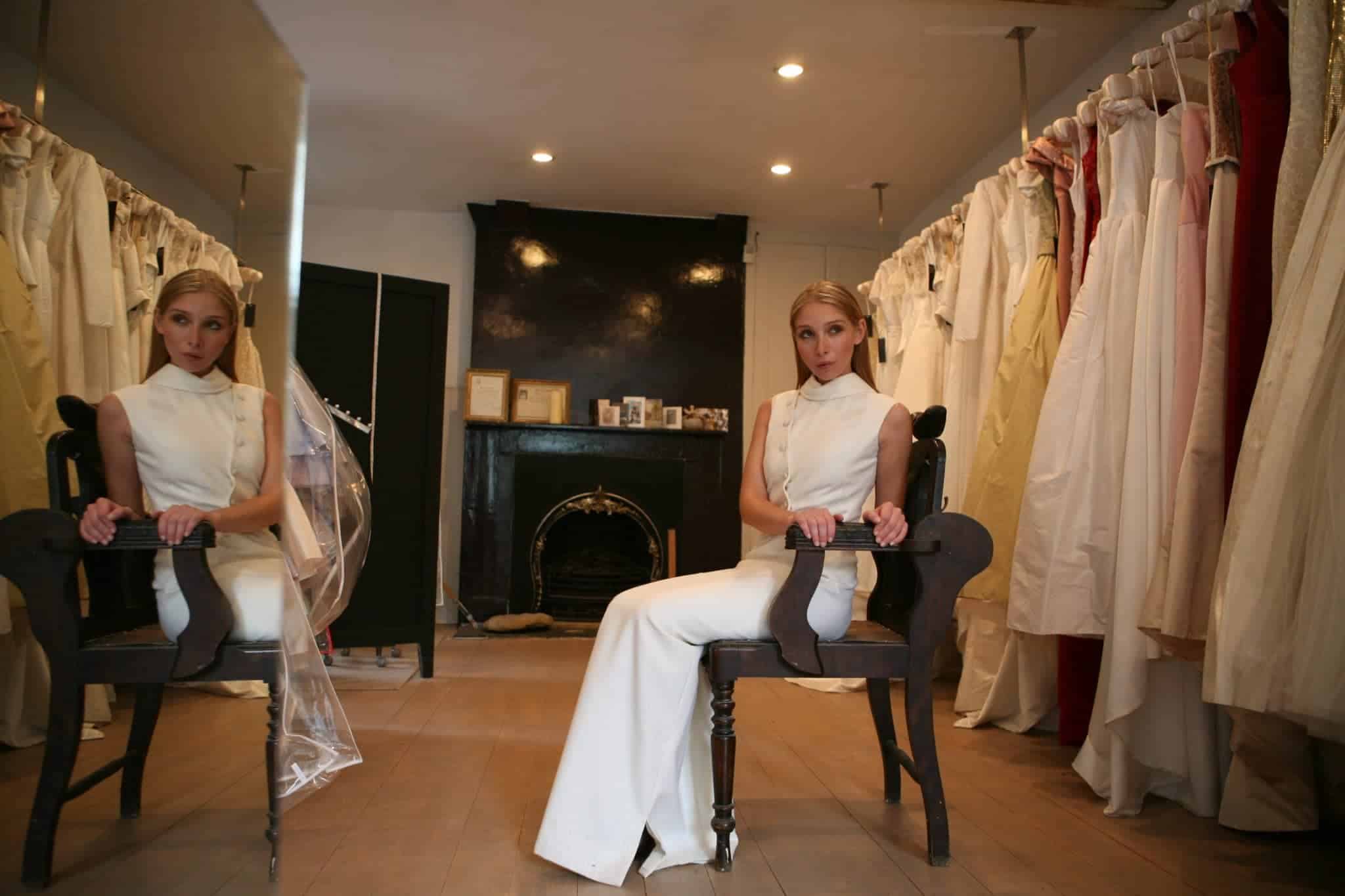 Reputable SMP courses, particularly advanced classes, were non-existent at the time. Much of what Renée learned was self-taught through researched theory, practice on synthetic materials and eventually through work on real clients.

Renée fell in love with this new direction. In scalp micropigmentation she had found a truly life-changing procedure, and a totally different client base of people who really appreciated her work. Her male client base grew from 2% of her treatments to more than 60%. Some weeks, Renée treated nothing but male clients.

At the time, scalp micropigmentation was virtually unknown. Although basic hair tattooing had been used for years to camouflage hair transplant scars, it hadn’t really been standardised and brought to wider public attention. One particular big-brand clinic claimed to have ‘invented’ SMP, and were quite aggressive and threatening toward Renée and her new service. 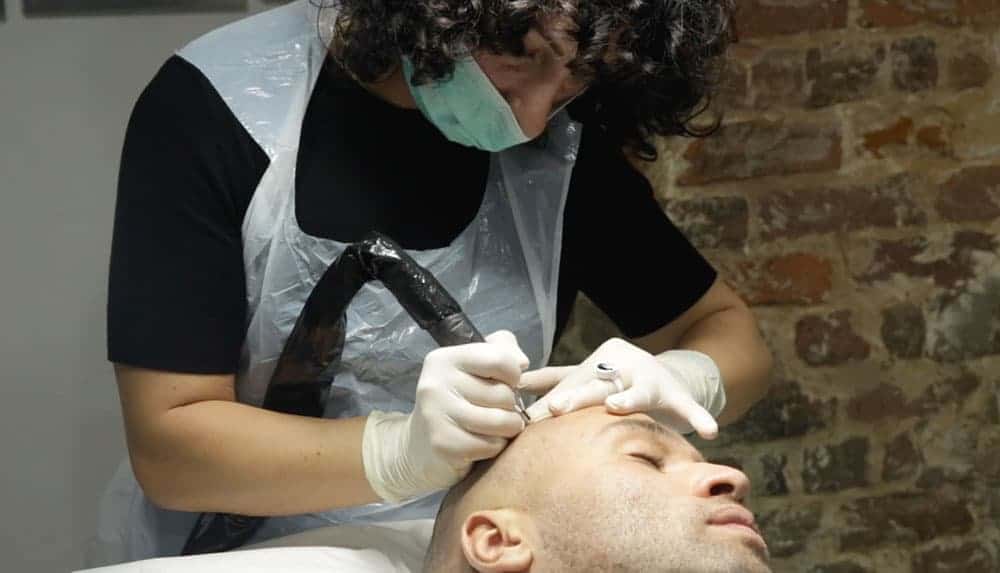 Meanwhile, Renée’s tenant in the hairdressing salon was proving unpleasant to work with. So Renée decided to take the shop back and manage it herself. Renée employed two barbers to work in the shop, and for a few years everything was running smoothly again.

Local media outlets took great interest in Renée’s story. Her family had been part of the fabric of Spitalfields for a long time, and her dress shop Nicolerenee was already featured regularly in major bridal publications. Cleo’s Barbershop was featured in Spitalfields Life and Renée has been interviewed by local and national press including Sloan Magazine, Female First and the Daily Mail about her work at The Dermatography Clinic..

In 2014, Renée made the difficult and emotional decision to close the shop that had once been her late fathers business, and expand her growing micropigmentation business out of the basement and into the shop upstairs.

Renée still felt intimidated by the big name clinic. They were in the process of opening clinics all over the world, and Renée’s service was at odds with some of their claims. Renée kept her SMP business low key, and didn’t promote herself or her service in the way she maybe could have done. It took her a long time to gain the confidence to share her work with the world. Had it not been for the support of the wider SMP community, Renée’s work would not have been shared publicly.

Despite flying her business under the radar, The Dermatography Clinic continued to grow. This growth came more slowly of course, but with so many people recommending her and referring their friends, colleagues and family members, Renée had plenty of work to keep her busy. 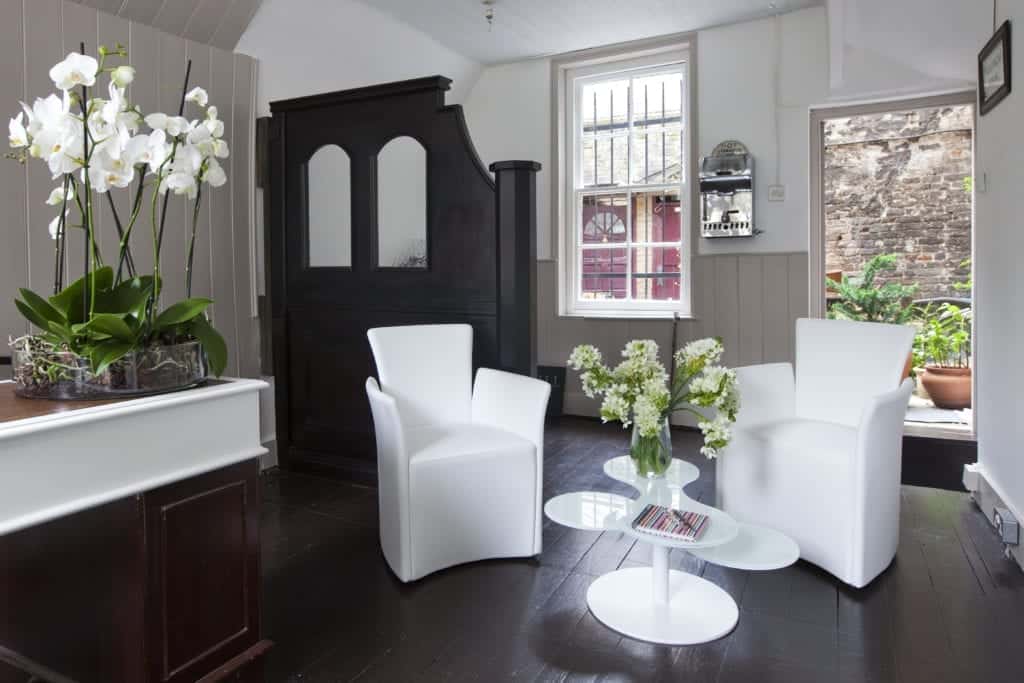 Renée’s last proper dress commission was in 2008 when she started doing permanent makeup. It was a big one where she made six dresses for a high profile client. Renée tried to hold onto it for a further 2-3 years but that was just to sell what she had. It was slow anyway. Her mum couldnt work anymore after her dad died, so Renée had to make the odd dress as well as run the business on her own and her heart wasn’t in it anymore without her mum being with her. Plus after experiencing her dream job with a high profile client where she was able to design six gowns for her muse, she didn’t want to go back to making simple wedding dresses anymore.

Renée preferred to go out on a high with great memories. Permanent makeup took off immediately and she was really enjoying feeling like an artist again. Everything fell into place as if it was meant to be, and she eventually let go of Nicolerenée.

Scalp micropigmentation treatments were really starting to take off. The SMP industry in London was growing, and with her long tenure as an artist, clients were coming to The Dermatography Clinic from across London and far beyond.

Doubtless, things have changed. Renée’s business is more medical-focused now, attracting a disproportionate number of clients for scar and alopecia work, and anything unusual that other clinics struggled to cater for. Although the business remains a full service micropigmentation practice offering permanent eyebrows, eyeliner and lips, there is a definite focus on scalp clients now, often with a medical twist or a flavour of the unusual.

Renée also attended the annual Meeting Of Minds conference in London in 2019, a significant step for someone who had never really exposed herself or her work to the wider SMP community.

Attending the conference is something I really wanted to do for myself. I had been isolated business-wise for such a long time, I wanted to meet everyone and see what was happening in the world I was a part of.

Having visited Renée a couple of times in 2019, I couldn’t help but be impressed by the location of her business. Whereas in the past Spitalfields was a working class, inner-city borough, the area is now one of the most vibrant parts of the UK to be, with swanky restaurants and buzzing nightlife, and some of the most expensive property prices in the country. The Dermatography Clinic is down a walkway, literally 20 yards from the high street, opposite the old Spitalfields Market, just a short walk from Liverpool Street Station, Shoreditch and the City of London.

Inside the clinic, every room is beautifully decorated and the whole place feels cosy and welcoming, yet professional and efficient. More so than any other clinic I’ve been to, The Dermatography Clinic really is an expression and extension of the owners personality. In a building full of character and personal history, and having based there for so many years, it’s little surprise that the place feels totally Renée.

Renée has been asked to train others on so many occasions, and for years she has always said no. Renée pours her whole heart into her work, and although she is an exceptional artist, she didn’t know if she would enjoy training others to do what she does.

In late 2019, Renée decided she would begin sharing what she knows with other artists. This decision was driven partly by her need for personal growth, but also because she knows she can offer more than what many high volume training schools do.

My path is directed by what life brings to me, and now is the right time to share my knowledge. After more than 12 years of practice, I feel I have value to offer.

Personal service is not just important to Renée, it’s a passion. Ever since The Dermatography Clinic opened in 2008, her desire to offer more and to be better has driven her direction and all of her key decisions. Renée simply doesn’t know any other way, so when she decided to start offering training courses in Spitalfields, once again she knew she had to do things differently.

Renée will be offering a range of courses, coming soon. Of course there’s a lot of theory, but also a huge focus on practical application of what she teaches. Unlike most courses, there is no defined time limit to her post-training support. The amount of time spent is dependent on what the trainee needs and how quickly they are able to apply what they have learned and feel confident doing scalp treatments on their own.

Having known Renée for some time now, I’m really excited about what she has to offer. It’s no secret that poor quality training is rife in SMP, so when one of the longest tenured artists in the world, one so passionate about ethics, says they’re going to start educating others, it can only be a good thing.

Renée is a profoundly positive person who exudes energetic enthusiasm in everything she does. The future is no doubt bright for Renée and The Dermatography Clinic, and I’m certain she will accomplish great things in 2020 and in the years that follow.

Login to The Dermatography Clinic
Reset Password
Enter the username or e-mail you used in your profile. A password reset link will be sent to you by email.
error: Content is protected !!
We use cookies to ensure that we give you the best experience on our website. If you continue to use this site we will assume that you are happy with it.AcceptPrivacy Policy